By Cheryl on September 7, 2013 in Parrot's Mash: Miscellaneous articles

I received an email from a woman interested in writing a guest post on For Parrots. I asked her what she had in mind and she suggested a few topics, one of which was Animal Assisted Therapy as it relates to parrots. This sounded great, and I agreed because I felt it was a wonderful opportunity to further education about parrots with those who are new to the subject (ie. the woman who emailed me: she would have to research the topic), and also because I thought it was an interesting idea: those who know parrots know how empathetic they are, and we have multiple stories to prove this. She and I had a good time discussing parrot issues back and forth, and in the end we both gained a greater appreciation for the intelligence of parrots. My sincere thanks to Marcela for writing such a compassionate and interesting post!

Furry friends have always been known to improve our moods when we’re feeling down, but a pet-assisted therapy doesn’t only have to be in the form of a cute cat or dog. Parrots are intelligent creatures that can bring joy into one’s home, given that an owner is willing to take the time and effort to care for these empathetic birds. 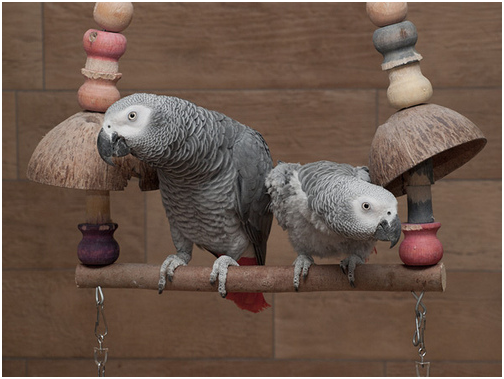 In some cases, parrots have been able to help those with mental or physical disorders work with and overcome their conditions. Jim Eggers, who was diagnosed with bipolar disorder with psychotic tendencies, would have a habit of becoming “Hulk”-like during his mood swings, disrupting the public peace, damaging property and hurting people.

Since Eggers knew he could be dangerous, he wanted to take steps to improve his personal situation. Having always been an animal lover, Eggers had the opportunity to purchase an African Grey Parrot, named Sadie – this turned out to be a life-altering decision for the better.

Sadie made for a fun, loyal companion – she, like many birds, was very intelligent and could imitate words she would hear from Eggers. She would go everywhere with him too since Eggers had registered her as a service animal (as of 2011, however, only dogs are recognized to be service animals). She bonded quickly with him, to the point of having the ability to placate his dangerous mood swings.

Whenever Eggers would feel an episode was about to happen, he tried to control his mood by saying “calm down” aloud to himself. Eventually, with Sadie being in hearing distance, Sadie began repeating these same words to Eggers, “Calm down.” This would immediately bring Eggers out of his state and bring him back in control.

During one particular bout when Eggers felt an episode brewing, Sadie was the first to speak up. Sadie’s instinct was both shocking and amazing to Eggers, although to Dr. Irene Pepperberg, a noted scientist who studies and works closely with parrots, the bird’s words come to no surprise.

While Eggers’ case where a bird helps a person with bipolar disorder is rare, Dr. Pepperberg says birds look out for one another and their owners. Sadie could sense that her owner was not in his stable state, so she acted upon that knowledge to calm him down and get him comfortable.

To say the least, Sadie has saved Eggers’ life.

While a bird can do so much for an owner such as Eggers, it is important to note that an owner equally needs to do much for the bird, as taking care of parrots is a demanding task that may not be for everyone. A would-be owner needs to ask one’s self if s/he can genuinely put in the time, effort, and heart into taking care of these intelligent and beautiful creatures.

The owners of “On a Wing and a Prayer,” understand the hard work and love that goes into taking care of parrots, and they can vouch for the soothing power of birds.

A pet-assisted therapy program in Oklahoma dedicated to working with birds, owners Maureen Horton and Joyce Legere can see that the birds bring their clients, those in nursing homes and other rehabilitation facilities, back to a softened state – those who wouldn’t talk begin to speak again, and hardened criminals are like children in awe when they see and want to pet a bird.

There are other examples of how the healing benefits can be mutual. In 2007, NPR ran a story of war veterans suffering from post traumatic stress syndrome and they worked in a sanctuary with abused birds. The relationship was symbiotic for the birds and the veterans as they were all coping with what they had experienced, and were on the path to recovery with one another’s help. 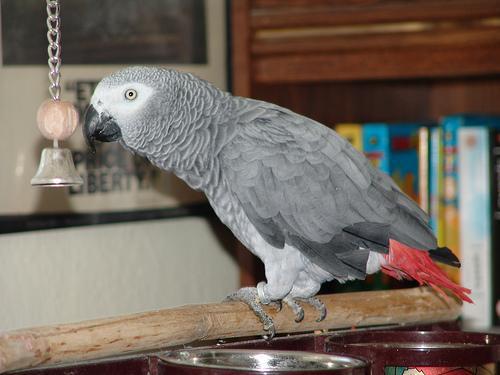 Through animal assisted therapy programs or having them as pets, parrots can bring about a world of good and happiness; but as the relationship has to be mutual, an owner has to be willing to bring about a world of love, goodness, and happiness into the parrot’s world as well. If one is able, ready, and willing to care for a parrot knowing the hard work that goes into the task, parrots could make great companions.

Marcela De Vivo is a freelance health writer and proud mother of three in Southern California. As a mother of a special needs child, she has tried several different therapies and encourages other parents of special needs children to do so as well. You can follow her journey by visiting www.PrayForNathan.org.